DEALER PROFILE: What You See and Hear

This is the modern world

When What You See and Hear in Beaconsfield decided to relocate into premises with no retail frontage, managing director Steve Martin was worried, but knew this was the way ahead for his CI and high-end audio business. Chris Frankland went to find out why

No one would ever guess what’s behind the anonymous black door that marks the entrance to What You See and Hear. A solitary entry phone with a nameplate is the only clue. Let’s make no mistake, these guys are not relying on passing trade.

As I am shown in, I realise that I know managing director Steve Martin and sales director Colin Macey from way back when I was a fresh-faced hi-fi journalist writing about the new wave of British hi-fi companies that were rewriting the rulebook on good sound and how to make it.

These guys were part of that, too, but as retailers. And two of the brands they were selling, and I was writing about back then, were Linn and Naim – two companies they are still dealing with today.

Completing the team, and the company’s programming ace on the CI side of things, is technical director Marcus Johnson-Baker.

But I am not here to talk about the past. Nor, I hasten to add, are these guys mired in the past. They are firmly rooted in the present. They have radically changed their retail model for the modern world and have their eyes firmly focused on a new future. 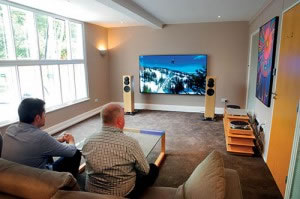 Abandoning their old high-street premises when the landlord threatened to raise the rent by half was just part of how they reinvented their business. Realising that the people who want the top-end hi-fi they sell will find them anyway, and that the custom-install business they get came largely from architects, specifiers and developers, they decided to move to less expensive premises in the old town of Beaconsfield and spend what they would have wasted on higher rent on marketing – something they admit they had neglected before.

And it is working well for them, says Mr Martin…

We’d been talking to reps about how other retailers have been having to move further and further from the centre of towns.

Well, the lease on the property was coming up. They wanted to increase the rent by 50 per cent over a five-year period.

The old shop had a lot of A-class frontage, but it couldn’t be used for demonstrations as it was too noisy – singled-glazed windows with the A40 rushing past outside. And we analysed how much passing trade we were getting and came to the conclusion that it was virtually zero. 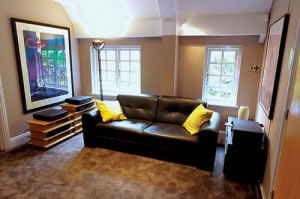 We all agreed to look somewhere else. We could see that we should be looking at a new way of doing things. Passing trade is disappearing from the high street and in any case that was not what we were after.

So we decided that we should become more focused. I had sleepless night after sleepless night about taking our face off the retail frontage. Then I thought, what if we take that money we’ll be saving on rent and employ someone to do some marketing? And that’s what we have done.

We actually employed Marcus’s wife, who is a professional with a history in event management. She knows about marketing and has been optimising our website. She looked at the people who clicked on our website and where they had come from. And she found that over 80 per cent of people who visited our website came via Linn’s website.

Q: You kicked things off here with a Linn lounge [where customers are invited to listen to music from one artist on a Linn system] as part of your opening event [April 28]…
SM: Linn were falling over themselves to help. We invited 3,000 local people and all our old customers. We did two on the Saturday and Sunday – David Bowie and Fleetwood Mac. Twenty-two people in our dem room to listen to Fleetwood Mac. We overheard one young girl, who was there with her father and didn’t have a hi-fi system, talking outside on the phone to her friend, saying ‘you should hear this hi-fi system’.

So all that marketing, keeping the website up to date, doing a news feed, sending out quarterly newsletters for the first time ever and we have a Facebook presence, seems to be paying off.

Q: Is it a challenge to attract the iPod generation who have never had hi-fi systems?
SM: I think that is an exciting market at the moment and it is quite strange. I am getting people coming to me who have bought some records but haven’t got anything to play them on. HMV sold four record players every minute over Christmas – to young kids.

The future is becoming homogenised and people want something different. I see that as one way in the future of bringing new people in.

The other thing is that the iPod generation is starting to demand quality. The MP3 days are numbered. The difficult question is how we target them and bring them in. 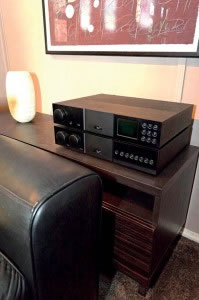 Q: You cherry-picked just Linn and Naim. Has that proved a good decision?
SM: Yes. Because we are specialists and that means you specialise. Car showrooms don’t sell loads of different makes. And if someone who walks in is not the right customer for you – recognise that early. On the CI side, we literally turn people away

Q: Would you sell cheaper turntables?
SM: To be honest, no. We’re not tempted to come down on our system prices because we can’t afford to. Our business model doesn’t allow us to sell cheap products – we are not geared up for it. We’d need a higher-footfall location, be selling greater numbers and therefore offer less service to each customer and suddenly you dilute what you are actually good at. There’s no point.

Q: A large part of your business is custom installation. What sort of projects do you do?
SM: Very large houses. We have just completed the first phase of a £54 million private house in London. Our budget was £700,000. That included fibreoptic distribution of high-def to 12 rooms with 30 rooms of audio, lighting and heating control, door and remote access monitoring. Lighting has always been big for us. But the lighting market is maturing and suddenly there are off-the-shelf solutions. You can go to B&Q, plug in a series of widgets on your lamps and control them from your phone. And so for us, as specialists, we don’t want to be dealing in a marketplace like that. We like to add value to what we do. We are always on-call for our clients and can remote-access and monitor their systems whenever we need to.

Q: What CI brands do you mainly deal with?
SM: We deal mainly with Control 4, Crestron and Lutron. And in here we have fitted Rako – a British company. You have a battery keypad on the wall and each circuit has a transformer and collector and it talks to those seamlessly.

We never use iPads or iPhones as controllers. We use Control 4 and Crestron. Everything is changing in our control systems now, as we are doing bi-user control. Every user has a profile and has their own Sky box, their own Apple TV, their own Kaleidescape player. Before we used to have to have six Sky boxes but we don’t need to now. These products let us program exactly what is needed – as simple or as complex as we like.

We are currently doing a project in a very large manor house at Stoke Poges which goes over 10 acres with a pool house. So we have a networked fibreoptic system through Control 4.

Q: You don’t have a home cinema room here. Is that aspect of the CI business diminishing?
SM: I think you’re absolutely right. Home cinema is doing what most mature markets are doing. It’s either going down to a packaged system for a few hundred quid or you have a proper dedicated cinema room. Which, in a big house, is what we will do. And we’ll do surround sound. 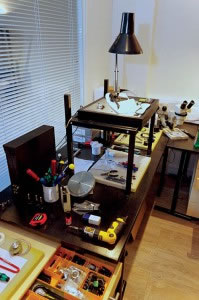 I tell people that the 85in Samsung LED TV in our demo room here, with the amount of light coming in through the windows, is much more watchable than a projector and screen. And so for standard rooms, this is working better. But we still do cinema rooms.

Q: So staff training must be key…
SM: Absolutely, I was chairman of Cedia and also its chair of education for five years. I think training is absolutely vital and the nice thing these days is that training is coming from all sides. Cedia offers a fantastic level of training and manufacturers do too.

Q: What of the future for WYSAH?
SM: I suppose one of the things as you get older is you spend your teens and twenties and thirties being gung-ho and wanting to be the richest man in the world and really grow your business. I used to work six days a week, install two nights a week, work until midnight. You do all that and then you wake up one day and decide what’s really important. You want a happier life and to spend more time with your family and friends. Do I want WYSAH to go anywhere amazing? No. I want to make a living, sleep at night and be happy with life. And we’re six years in now and, I tell you what, we’re happy. I think we will see a bit more growth and I think the marketing side will help with that, but we’re not greedy.

Only fools and electrical retailers?

CDA celebrates a quarter of a decade in business