DEALER PROFILE: The art of smart Avensys has opened what it claims is the UK’s largest smart-home retail space in its Crawley superstore.  Sean Hannam spent the day there.

Avensys managing director Markus Wood (pictured) loves technology. His office is a shrine to old electrical products, including the first Sony Walkman – still in its box and branded Stowaway – vintage radios from Hacker and Roberts, a Betamax video recorder, hi-fi headphones, turntables and a mobile phone from 1985 that’s the size of a house brick.

“I’ve got a degree in computer science from King’s College London and I’ve always been interested in tech and toys,” he says.

During our chat, he takes great delight in showing me live CCTV footage of the solar panels that are installed on the roof of the company’s HQ and he also calls up data on his large, wall-mounted, flat-panel TV screen to show me the eco credentials of the building. His store even has electric car-charging points that can be used by customers.

“The environment and the eco side are very important to us – we’ve got 200 solar panels producing electricity, so we’re an official electricity producer,” he says, excitedly.

Avensys has also partnered with Panasonic to sell the brand’s solar panels.

Avensys House is located on the Manor Royal Business Park – a stone’s throw from Gatwick Airport and the Virgin Atlantic head office. There’s also Currys, Next and Marks & Spencer on the doorstep.

In Avensys House, there’s an electrical retailing store on the ground floor, while upstairs is a brand new, state-of-the art smart-home apartment with over a million pounds worth of technology and products installed in an area that’s more than 4,000 square feet. 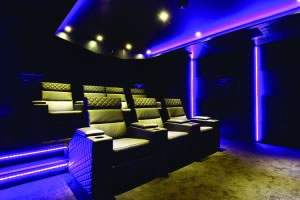 There’s a bar, lounge/diner, a designer kitchen, a bathroom, a snug, a study and even a seven-seater Dolby Atmos home cinema where, during my visit, I get to watch the awesome opening sequence of the Bond film Spectre, while drinking a beer.

The eco theme runs through into the smart home, with energy-efficient LED lighting and motion and ambient light sensors, combined with Silent Gliss curtains and blinds to demonstrate how to minimise unnecessary lighting.

The smart home was nominated for Best Showroom at this year’s Cedia (Custom Electronic Design & Installation) Awards. Next to the smart home there’s a training centre for staff.

Training is key for Avensys, says Mr Wood – both in-house and from manufacturers.

“We’re qualified to give Cedia CPD (Continuing Professional Development) courses – we can work with architects, designers and builders and they can come to the courses.”

He adds: “Customers can walk in and experience our smart home – it’s open for all to come and look at. A lot of other smart apartments are by invitation only.

“We can supply all the elements – from the heating, to the blinds, the white goods, AV, CCTV, door entry – the whole experience. We’re a one-stop supplier.

“We recognised a few years ago that the way consumers shop for home appliances and AV products would be changing, based on advances in technology used for consumer products. The industry expects growth in the smart home market of 450 per cent over the next four years. We think we’ve developed a concept that puts us in a great position to help people understand the benefits of a connected home and how it can work for them.

“It’s a different type of retailing and it differentiates you from other dealers and the shed at the end of the road. It’s definitely been the right thing to do – our turnover [for the whole business] is over £1 million up year on year and we’re forecasting growth of more than £1 million for next year.” 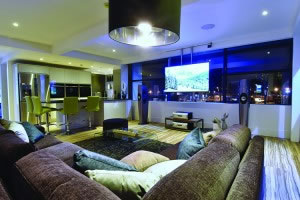 He adds: “We have deliberately included a large amount of technology and product options in our smart home. We do not expect to show every product to every customer – some customers will not be interested in audio but, for others, it may be the primary reason for their project. The same goes for video distribution, door entry and security.”

Mr Wood says the smart home will be updated as new products and technologies are released and he envisages major structural refreshes every two years.

He tells ERT that the whole smart-home project – from the initial planning to the design, building and installation – took around 24 months.

By comparison, the John Lewis smart home, launched on the fifth floor of its flagship Oxford Street store earlier this year, takes up 1,000 square feet of retail space.

“We feel consumers benefit from demonstrations and walking through the smart home, as much of the technology would be missed, as it is seamlessly integrated into the home,” says Mr Wood.

“Our belief is that a smart home should make your life simpler – not more complicated. Customers can see how you can bring together heating, lighting and security, the internet and entertainment products – all from one control unit or app. We take our time to explain the products and technology, helping people cut through the jargon and realise the concept in their own homes.”

Avensys’s building is also home to its live events company, which carries out commercial AV production work for awards ceremonies and corporate functions. The entire business employs around 46 staff, including 15 who work for the store. Store staff each have a tablet to demonstrate technology and access stock. If a customer orders a domestic appliance before noon, it will be delivered the same day. 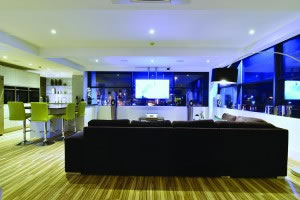 The company has 16 vehicles on the road and even an Avensys-branded Sinclair C5 electric vehicle. “We drive it to Currys at the end of the road – it’s quite entertaining,” Mr Wood says, laughing.

Avensys’s retail and custom installation operation accounts for around 40 per cent of the company’s overall revenue – around £2m.

The business used to have an electrical shop in Copthorne and also a Panasonic Store in Crawley, but closed these and moved its entire operation to the Fleming Way premises, on which it owns the freehold.

Says Mr Wood: “We’ve consolidated the businesses and the retail experience. When we formed, we were a live events company, but we started retailing in 2004, when plasma screens first came out. We sold brown goods – hi-fi and home cinema.  When we moved into retail, it was new for us and a bit of a challenge, but I love the retail side of it.

“We opened the Panasonic Store in County Mall, Crawley, five years ago and went into white goods, but the solus brand model didn’t really work. Now the customer has a choice and it’s all about the experience in-store.”

It certainly is. There’s really hardly anything that the Avensys superstore doesn’t sell. It has shop-in-shop areas from Panasonic, Samsung, LG and Sony, as well as a Smeg Zone, a Miele Centre and a Siemens iQ Centre – both with fully working kitchens.

“We’ve always got some sort of theatre going on in-store,” says Mr Wood.

As well as mid-market to premium small appliances, Roomba robot vacuum cleaners and cookware from the likes of Le Creuset and Joseph Joseph, there are also branded areas for multi-room audio, AV and hi-fi, a Dolby Atmos home-cinema dem room, vinyl LPs for sale and even a golf simulator, which will eventually be moved into the smart home, as part of a ‘man cave’ area.