‘We had to future-proof  our business’

ERT Award-winning AV chain Superfi has opened a new store in Camden, north London. The downstairs area is aimed at attracting younger customers who love music, while above the shop is a smart apartment.  Sean Hannam finds out how and why they’ve done it…

Last year, Superfi, which has high-street stores in London, the North and the Midlands, won ERT’s Consumer Electronics Retailer of the Year Award. Since then, it’s been inspired by our Turning Point campaign and is now embracing the smart home.

Upstairs in its new store in Camden, north London – which was formerly a Pret a Manger coffee shop and is a short distance from Mornington Crescent Underground station – it has built a smart-home apartment, while on the ground level, the shopfloor is aimed at younger consumers who want to buy fashionable headphones and stream music.

ERT went to the store, just before the official opening at the end of May, and spoke to managing director Dan Abrams (right above) and sales director Jurek Mucha (left above), who told us why they’ve been forced to change their business…

Q: Why have you opened a new London store?
Dan Abrams: We’ve had a store in Camden for 20 years, but we were reaching the end of the lease and we were approached by Pret a Manger, who came up with the idea of doing a swap. It seemed like a good idea to make a fresh start – it has slightly better footfall than the old shop. We left the old store in February this year.

What we’re trying to do is focus – the old store tended to stock everything from everyone, because, over the years, you become a kleptomaniac.

With the new store, we’ve tried to choose brands that aren’t commoditised on the internet. We need people to have a reason to come to the store, so we’re selling higher up the range and trying to make it so that people can’t just come into the shop, Google a product and then buy it from Amazon on their way home. 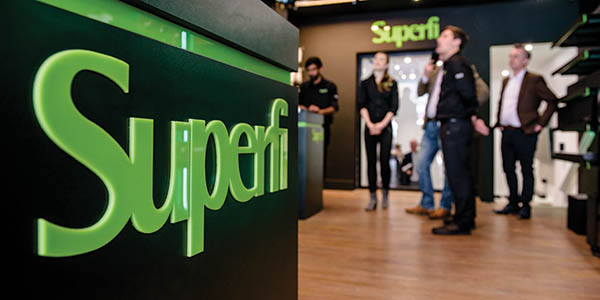 Q: So which brands have you gone for?
Jurek Mucha: Generally, in our other stores, we have up to 50 or 60 brands. In this store, we’ve reduced it to 15 to 16. We’re also not doing rows and rows of speakers, like we do in our northern stores – they’re just big boxes that take up a lot of room and they don’t do anything until you take them into a demonstration room.

Downstairs in this store, we’ve tried to create an environment that’s more attractive to a younger audience.

The hi-fi market is deteriorating when it comes to footfall – we need to bring a new younger audience in. One of their favourite things to do is to listen to music.

DA: This is Camden Town – you’ve got a lot of young people passing by… It’s a big area for music and fashion, with Camden Market and the Lock. We’re trying to tease young people in with headphones in the window, then show them what better audio performance they can get.

JM: Downstairs, in the front of the shop, we have headphones from brands such as Bose – we don’t want to look too techie.

It’s not just about the products – you’ve got to do the whole thing and change the look and style of the shop.

We’ve remodelled our own branding to give it a new look and design to bring us into the 21st century.

We’ve got video p-o-s, iPads to browse our website and we’ve also put a play table into the store, which allows customers to interact with the products – it’s plug-and-play and they can stream music from their phones. It’s making it easier for the younger generation – it’s maybe more Apple Store-esque. 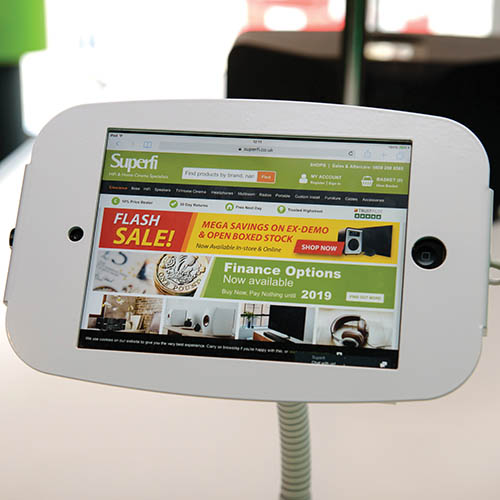 Q: How is the new store staffed?
JM: We want the staff to be consultative. We have four members of staff – the manager, Paul Benson, is new to the store, but not new to the business. He has an industry background – he used to be a rep for Kef and he worked in a Samsung shop. The other three staff started working in our other shop within the past year – they bring a younger vibe to this store, which replicates what Camden’s all about.

We’ve changed our policy on staff attire – they’re allowed to wear jeans and nice shirts. We don’t want staff in suits and ties – we’ve got to make sure they’re on the same level as the people who come into the store, so we can create a relationship straight away.

Q: Would this business model work in some of your other stores?
DA: We hope so – if this works… Nottingham’s got a big student population, and so has Manchester and Lincoln, but whether you’d put it in Derby, I don’t know.

Q: This is all part of a plan to future-proof your business, isn’t it?
JM: We have to do that.

Q: You’re also embracing the smart home – you have created a smart-home apartment upstairs, above the store, with a kitchen and a living room.
JM: The kick-start for that was last year’s ERT Awards and the Retra conference, where there was a message being replicated – ‘if you don’t change, you’re not going to be in business’. To come out of your comfort zone and go into an industry you don’t know is scary, but we’ve had to do it. 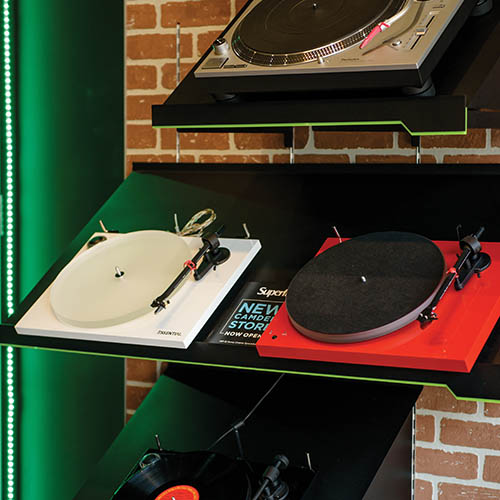 Q: Were you already doing custom installation?
JM: We’d dipped our toe into it, but not done the whole hog – now we are. We’ve installed a home automation system [in the smart apartment]. We’ve got a Door Bird video entry system that’s app-based and uses URC home automation and we have CCTV. We also have Philips Hue lighting and Dolby Atmos speakers.

The idea is to have a kitchen and a living room to show multi-room audio, home cinema, lighting, blinds and CCTV – by the touch of button, using an app, we can change the lighting mood, the audio and blinds. Each room can be controlled using a tablet or a URC remote control.

This is how the traditional retailer can move into smart-home technology.

Until the start of this year, we’d never thought about doing lighting. Downstairs in the store will bring young people in, but upstairs is where the big stuff will happen.

Q: How have you learnt the new skills to move into the smart home?
JM: We’ve become members of Cedia and we’ve worked closely with Paul Mott [director] at AWE, who has helped us enormously with the URC system and how to install it. We’ve had salespeople on a three-day AWE training course, who have helped to program the system here, so that it works seamlessly.

We looked at Control4, Creston and other systems, but we thought they were complicated and we didn’t how we would integrate them. Consumers will buy into URC because it’s simple – we need to be able to walk in the smart-home market before we can run.

We’re also working with a company called Technophobe who do high-end installations of smart technology. They will be able to support us pre- and post-sales. One of the major things is to be able to make sure you can support what you sell.

Q: How much has the new venture cost you?
DA: It’s a big investment and the dilemma is that if you have a couple of hundred thousand pounds spare, do you put it into a website or do you put it into a shop? It’s a tough call, because the website can instantly give you a return, whereas the store will have a longer payback.

Q: Last year, you picked up the ERT Award for Consumer Electronics Retailer of the Year. What did that do for your business?
JM: It was a bit of shock to win, but we’ve been promoting it since then and we got some recognition from within the industry. We put posters up in our stores and we put it in our adverts in What Hi-Fi? magazine – it’s an endorsement.

DA: Our team are proud of it and it’s made us, as Superfi, feel proud.

JM: Consumer confidence is down and it’s about trust. Consumers have to decide where to spend the disposable income they’ve got, or whether to save it. We’ve been forced to change – we’ve got to bring the younger generation into our stores. If we don’t, we’re not going to be in existence. I’m not just talking about Superfi – I mean the hi-fi industry.

Q: Do you do in-store events?
JM: We do, but we’re also trying to think outside the box – we’re buddying up with local companies, like jewellers or car showrooms.

DA: We did a successful event in Nottingham with a Ferrari and Maserati dealership and Bowers and Wilkins, Bose and Panasonic, where we showed our wares to a new audience. We got a lot of leads and a good few of them were converted.

JM: We’ve got to see how the new one goes – it’s a new concept for us and we’ve come out of our comfort zones to get it working. It’s a new challenge and it’s different – if you don’t do it, you become stale and the world passes you by.

Survival of the smartest