A passion for service

Ben Phillips left a career in the City to buy the Steamer Trading business from his parents in 1999 and joined as MD in 2001. He grew it from the original two shops to the 42 it has today, with a turnover of £35 million. Last year was its 30th year of trading. Chris Frankland went to meet him at the Bluewater store

Passion. That is a word you will hear often from Ben Phillips, MD of Steamer Trading. Passion is what drives him and all his staff and it is what has kept the chain successful for 30 years. And it is obvious from my first contact with his staff at the Bluewater store.

I arrive early and the shop is not yet open, but the lights are on and I see signs of life. I ask shop supervisor David Sugg if I can leave my bags in the shop while I go off to Costa to wait for Mr Phillips to arrive. But he will hear none of it. “We can make you a coffee,” he kindly offers. How could I refuse?

He leads me across to their impressive line-up of machines, including prestige brands such as Sage, Jura and Miele, and gets Josie to make me a cappuccino. As I get talking to him about coffee, his knowledge and passion shines through. This is a man who could persuade me to spend £1,500 on a Sage.

This passion also manifested itself to our Take a Town mystery shopper, who gave staff at two Steamer stores he visited top marks for service.

When Ben Phillips arrives, he too is offered a coffee. As I introduce myself, it transpires he is a man passionate about coffee.

Mr Phillips and I leave Mr Sugg doing his store walk-round prior to opening and adjourn to the upper sales floor.

I ask him what his priorities were on taking over the MD role in 2001.

“I saw this very clearly as a business that could grow. Housewares is a specialist business, which is where a lot of big businesses misunderstand it. It is not just shifting boxes, there’s a passion involved.”

I ask what the cookware market was like back in 2001. 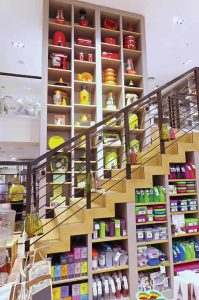 “If I go back to 1995, then it was a specialist thing and you could count the cook shops in the UK on the fingers of one hand. Near us you had Trevor Mottram in Rye and Tunbridge Wells and Toppings in Worthing, Kitchens in Bristol [now owned by Steamer Trading] and the grande dame was Divertimenti in London [also now owned by Steamer Trading]. These were well recognised, very specialist shops and they effectively took kitchenware out of the ironmongers. But it was an infant industry. People would come in and say ‘my God, I’ve always been looking for one of these’. You were selling products with great passion.

“In 2001, I could see good potential to grow it. I could see the world was going to change. Everyone’s interested in food, men are getting into cooking, people are more interested in how their homes look, so it ticks almost every box imaginable. But I don’t think anyone really big is going to do it really well. I also believe that it is going to need to get a lot more professional and I am afraid to say that the independent, with a few committed exceptions, will be a dying breed. Retail is a lot tougher than it used to be.

“I had a vision in 2001 that we would become 20 to 30 stores in 10 years. On our 10th anniversary we hit 25, but the overriding consideration was that we had to stay true to our original values and make sure that we put in these stores what we love, what we are proud to sell. And even more importantly, customer service. I said at the time, I don’t actually care if we make any money over the next 10 years. Because, if you are investing to make sure that every single customer becomes your friend and will recommend you, good things will come back to you.”

He tells me that the 42 store count, which has seen it branch out as far afield as Glasgow and Truro, also includes the acquisition this year of the well-known cookware shop Divertimenti in Knightsbridge, which also has a famous cookery school. It also acquired the three Kitchens cookware shops in Bristol, Bath and Cardiff.

He says that his ultimate goal would be 50 stores. “Beyond that,” he adds, “you have to keep looking how those stores and the internet play out alongside each other.”

And location is important. “All the early stores were where we could easily control it,” he explains. “We knew the towns well and we could swap staff around. When we felt more confident that we could manage stores remotely, we then pushed the boundaries. The towns are chosen very carefully, based on a seat-of-the-pants feel. You can’t rely on demographics. Take Lewes. It’s a cracking place to trade, but it has a non-food purchasing population of about 16,000 and many companies would never open a shop for that. But it trades well and that store takes more money than any other of comparable size.”

Its store in the Bluewater shopping centre in Kent was a bit of a departure, then?

“I don’t like shopping centres, but there are certain parts of the country where only a shopping centre will do. This shopping centre is beautifully designed. One day it will be a listed building. It is well managed. It has a vibrant feel. I actually like Bluewater.

“As a retailer, you can often lose sight of what the competition is doing. Your customer has been moving much more quickly than you realise.

“Here, we are up against the best that John Lewis and Lakeland can do, so we knew that we had to make this special if we wanted it to work. And, my God, we learnt a lot in two years. About merchandising, the importance of moving things around within the store, demonstrations – and we are still learning. It made us a better retailer. Do we have any plans for more stores in shopping centres? No, I don’t think so. For us, the market town formula still works better.”

Of course, retailing has always been in the Phillipses’ blood. Ben’s great-great-grandfather Henry opened a furniture emporium in east London in 1870, while his father David ran the local village store for some years before he set up Steamer Trading in Alfriston in October 1985.

David was a well-known figure in the cookware industry, having designed products for Finnish Design in the 1950s before being headhunted by Terence Conran for his Habitat chain in 1966.

“From the age of four I started working in the village shop my parents owned. Then when Steamer started in 1985, I was 15 and started working there at weekends. I ran it on Sundays for a couple of years before going off to university.” During his holidays, he even worked in a Jessops shop.

But alongside knives, kitchen tools, pots and pans and tableware, Steamer Trading also sells coffee machines, mixers and blenders, kettles and toasters. I ask Mr Phillips how big a part SDAs are of the total mix.

“It has become a significant part over time – probably 20 per cent – and we have been quite committed to it. Coffee machines are a big part of that and is an area that has really developed and engenders that enthusiasm. Don’t even touch it if you are a mass retailer. You have to be able to explain it and talk with passion about it. It is a bit like wine.

“We are also quite judgemental about the machines we sell [Sage, Jura, Miele, Dualit and De’Longhi]. We sell a lot of pod machines, too.” 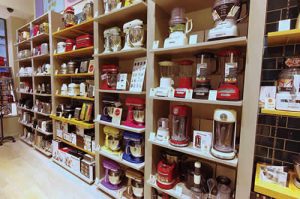 But has the kettles and toasters market become too commoditised?

“We are selective,” Mr Phillips admits. “With toasters we originally had a purist view and sold only Dualit. The world has changed and there are more options and they are a style element and people will want to change them, but we still sell brands that we regard as very good, robust and well made and that we can service. We cannot shift a £20 toaster that will be price-matched down to £15 and be competitive.”

In kettles, he says best-sellers are always the most premium models, and they tend to stick to Dualit, KitchenAid and De’Longhi.

“KitchenAid is a very big brand for us,” he adds. “It’s a classic piece of American industrial design and an aspirational product. But I think they have allowed it to go to far too many people in the UK in whose hands it shouldn’t be.”

I ask Mr Phillips if the rise in popularity of induction hobs has affected their sales.

“Yes absolutely. Clearly, as cookware retailers we were on to it very early. It is still not huge in the embedded base in the market, and there is also still a complete lack of knowledge. And a lot of people still love gas. For me, personally, I am induction through and through.”

So how has business been for Steamer Trading over the past few years. 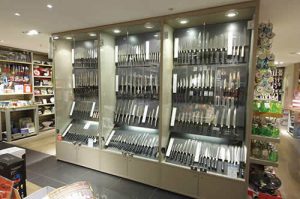 “Anyone in bricks-and-mortar who says they have seen a significant uplift over recent years must have been doing a pretty poor job before, because there hasn’t really been like-for-like growth in stores over the past year. This year has been much tougher and John Lewis’s latest figures reflect that. For this financial year, it’s too early to say, but I wouldn’t expect to see like-for-like sales growth.

“In terms of turnover, we have opened a lot and acquired a lot this year, but I guess in the back of my mind is a figure of £35 million. We have also invested heavily this year in logistics and replenishment, in building our teams and stores, in our cookery school and we’re putting some big investment into online.

“We came into online later than most, because first and foremost we are bricks-and-mortar retailers. The two are not the same, and understanding one does not make you good at the other. We didn’t want to push online before we knew that we could do something different. We have invested a lot and now have the right people on board to grow that. That is where you will see the big momentum and investment from us over the next couple of years.

“For us, it’s very much about adapting quickly. We have a very clear vision of where we want to take the business. But what will never change is our core commitment to customer service.”

Discounts not the only strategy for Black Friday, says report