Taking it to the MAX

Why did a successful market town independent decide to reinvent itself with a name change and fresh new approach? Chris Frankland went to visit MAX Electrical

One thing that emerged from the recent ERT Turning Point Summit was that independent electrical retailers are at a crossroads, where the way to future success means not only playing to their traditional strengths of customer service and top-notch advice, but facing the future with a fresh approach to the changing face of technology, how customers are shopping and improving their in-store experience.

Ian Jones, of what is now MAX Electrical in the Leicestershire market town of Lutterworth, was at the summit and told me about the rebranding and reinvention of Lutterworth Sound and Vision.

A winner of the ERT Best Consumer Electronics Retailer award in 2012, his retail model was hardly broken, but he and his wife Sharee had come to realise that the name, Lutterworth Sound and Vision, was sounding rather old-fashioned and did not actually convey what the shop sells today.

Speaking to me at his shop, Ian says: “Lutterworth was too localised. It’s a small market town. Sound was just for hi-fi and Vision was for TV. When I first started out in 1984 I had no intention of doing white goods, so back then the name said exactly what we did. It was OK in 1984, but time has moved on.”

Sharee tells me: “MAX we thought was inspirational – the maximum, the best you can be. It’s a three-letter word and it springs off the tongue easily. It has positive connotations. But more than that, you can remember it – and people have remembered it.”

Ian and Sharee used a marketing company to design their new logo. Sharee explains that the new logo underpins everything they now do: “Because it’s just three letters, it becomes a big logo. Lutterworth Sound and Vision was a long logo, and in advertising terms, it looked small. MAX has more visual impact, it is modern and fresh, and you can do a lot with the name.” 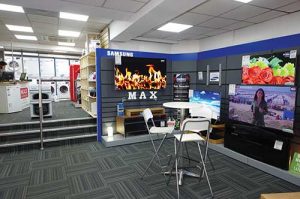 And as a bonus, the URL www.maxelectrical.co.uk was also available. So they snapped that up without any hesitation.

Prior to the big Saturday launch day on September 29 last year, son Simon helped produce a series of teaser adds, with the old Lutterworth tantalisingly peeling back at one corner to reveal successively more of the new logo as launch day approached.

September was a good choice, Sharee remembers: “We launched in September because it is the busiest time of year and we knew that we were going to spend money on advertising anyway. Not only did it increase trade, it also got the message out that we were changing our name. We also mailshotted and emailed existing customers. We used a picture of Ian for that, as he started the business and people still want to see his face on it. ‘Same people, new name’ was part of the strapline.”

Indeed, to underline that, the new MAX website also features many photographs of store staff. Ian adds: “Our older customers wanted reassurance that we hadn’t sold out to one of the big boys.” As Sharee puts it: “Personalisation in this age of commoditisation.”

Sharee tells me how she lay awake the night before the relaunch, wondering “have we killed the business?”

Ian takes up that point: “The rolling turnover never dropped. We were worried beforehand, but the marketing campaign was so successful that sales only went up.

“In 2015, we had a very, very good year and it has been up every month until December, when it went slightly flat. But turnover is up by around 10 per cent, which is quite pleasing, and we have managed to retain a better margin.”

Although they do admit it is difficult to assess how many new customers the new branding is bringing in, one thing they have noticed is that they are getting more younger customers, especially for Sonos and Samsung. 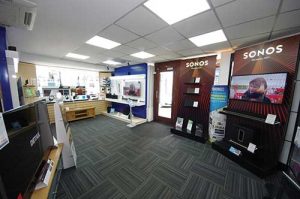 As I take a quick tour of the shop, Sharee shows me some of the changes they have made. There is a bigger SDA display than on my first visit in May 2013 and what was the home cinema room now houses refrigeration products. The fitted kitchen area with working hob is still there, the extensive display of range cookers remains, but the built-in display has increased in size and scope.

In terms of SDAs, Ian explains that they have resisted the temptation to go too ‘premium’. “People think we are expensive,” he admits, “so we don’t want to lose a certain section of our customer base. That’s why we haven’t gone heavily into all premium SDAs. And let’s be honest, £90 for a kettle is ridiculous in the cold light of day. We do sell them, but you need an offering for £30.”

Image, they both confide, is a big problem for independents. They are at once perceived as too expensive and yet still small corner shops.

Ian elaborates: “Almost all independents have that image problem. Stellisons looks big – and it is, but for us, it’s a case of shaking off that corner shop image.”

Sharee adds: “Many dealers have gone from the high street to the business park, such as Purewell, where they get free car parking and become a destination store. And although we are a destination store here, we are still part of the community and have regular footfall. But it makes us look smaller and we need to change that perception. The rebranding is a part of that.”

During my tour, I had also spotted evidence of a new area that MAX has moved into – furniture.

Ian tells me how the company that has for some years been supplying them with AV racks and furniture also does general living and dining room furniture, and this is an area he and Sharee think is worth exploring.

But she explains the problem: “If we had the space, we could have been really successful with it, but we don’t. We had one customer who kitted out her complete kitchen and lounge – that was a substantial order. She’d come in to buy something else. It’s a question of how to take it to the next level and in a shop this size.”

And to help make the most of the younger buyers MAX is attracting, they have not only Simon on the staff, but have recently taken on Sam straight from school.

Sharee explains: “Sam came to us from school as a 17-year-old on an apprenticeship scheme and he got up to speed really quickly. He loves technology so he likes talking about smart TVs, connectivity and smart home. Surprisingly, he was equally interested in white goods. He has also been quick to learn the sales skills.” 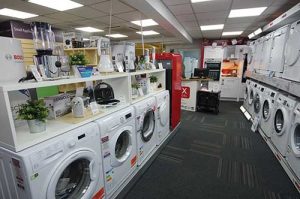 Ian is equally enthusiastic: “He is extremely professional. We are delighted to have Sam on board, and with our son Simon, and the maturity of [manager] Shaun, that’s a good mix.”

So what is next for MAX Electrical?

Ian tells me that they have looked at the shop that became vacant next door, but he feels it is too big for the customer base the shop has, and he likes the prominent corner location that has served them so well over the years. “I think we have the best, most stable retail position in Lutterworth,” he says.

Sharee says: “Now we have the name established and the customer base thinking more about MAX, we need to take it to the next marketing level. Simon has been busy with Adwords and Facebook and the internet – so that has come on more.”

They are also aware that shoppers today demand more of an ‘experience’.

Sharee adds: “We are at the crossroads of deciding what we can give as a shopping experience – such as events. We have done events and they have been successful. We had a Sonos evening event. We know we need to have a different offering from Currys – we don’t want to be a walk-in store – walk in, see the products and walk out. We want to engage with customers and the next stage for MAX Electrical is how are we going to offer that engagement.

“We have fantastic steam generator irons – do we get a board up and do some ironing, or offer to do people’s ironing? People love a bit of theatre.

“We do more sale days than ever before and we will have a September open weekend as a preview to the Christmas trade. We have also started running a January sale, which we never used to do, and we’ll have a spring sale and open on the bank holiday.”

Acknowledging the café culture that has taken over the UK, MAX is also offering a free coffee at Karter’s just a few doors down, so that people can go away and talk over their impending purchase. Nine times out of 10, Sharee tells me, they come back and buy.

But they are not going to rest on their laurels yet. 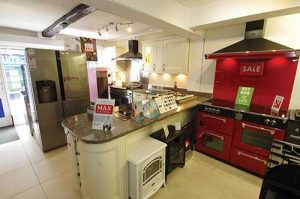 “We need a call to action so that we will be known as the place to come,” she says. “Even with that, you still need to get the people in to experience it. But you do have to advertise and many indies think that is money wasted. I don’t ever think that advertising is wasted.”

Despite council plans to abolish free parking for shoppers for the first hour, the mood of this thriving independent is positive and they will be ‘taking it to the MAX’ in the future.

What about the consumer?