‘When the big boom happens, we have to be perfect at it’

Hughes is taking tech retail to the next level with its new smart apartment in Ipswich. General manager Ashley Shorey-Mills shows Chris Frankland around

As Hughes Smart Home general manager Ashley Shorey-Mills is giving me a quick tour of its first smart apartment, in the Felixstowe Road store in Ipswich, we are interrupted by the arrival of two customers who bust wide open my preconceptions of the typical connected-tech consumer.

The couple are in their sixties and the husband is a tech-savvy computer engineer for British Aerospace. They are looking for a Sky Q box and some advice on AV networking and distribution and discover that there are many more possibilities than they had imagined.

When I visited it towards the end of November, the smart apartment had been open for just three weeks, but it had already secured 12 customers – half of them from Norfolk.

The apartment is at the back of the store in what was a meeting room and has been furnished and laid out to offer lounge, bedroom and kitchen sets, so as to demonstrate how a broad range of smart products will actually work in a real-life setting.

It is planned that, in time, there should eventually be another smart apartment, in Norwich.

Business has been growing year on year and Mr Shorey-Mills has ambitious plans for the Smart Home division to attract more new customers rather than relying purely on leads from the stores.

Q: What led you to go down the smart apartment route?
Ashley Shorey-Mills: There is only so much you can do in-store or when you go out for a consultation in customers’ homes. It just makes sense to invest in somewhere to be able to show them. The apartment takes it to the next level. Products like Loxone and HD Anywhere and Epson projectors need the right environment to show them off properly. We get more support from those brands if we show their products properly and it brings us more business.

Our smallest shops only have a finite amount of space, so it’s about them starting the journey with that smart-home customer. It is their sale, they own it, they just hand it over to us to look after.

Q: Do you have permanent staff to man the apartment?
ASM: No, because we have the shop staff. There are five smart division staff based in this area – two near Ipswich. If they are not visiting customers, they will come and work here. So it is down to shopfloor staff, who have all been trained, to engage with customers and say, if you are really interested in smart home, I will book you an appointment.

Q: How have people reacted to the smart apartment so far?
ASM: Overwhelmingly positive. They love that they can come in and see retrofit and first-fit products working across brands. It doesn’t matter if it is an old product – it still works and shows the customer that they don’t necessarily have to replace everything. 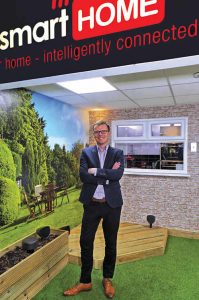 Q: What are your main brands in the apartment?
ASM: Loxone – for audio distribution, lighting and heating. HD Anywhere – video distribution. Sky. Lilin for the CCTV. Samsung, Sony [TV and PS4], Panasonic and Aquavision for the kitchen and bathroom tellies, Bosch appliances, Apple TV, Roku and many more.

Q: Who have been your typical smart-home customers?
ASM: It’s a broad spectrum. There are people who just want things to work. Those people who are really into their gadgets have probably already adopted it. Although there are still opportunities for us to upgrade it, or integrate it properly for them. A lot of customers are aware it’s out there, the prices have come down, and now they have a retailer where they can come in and see. That helps open it out.

Our first accepted quote was a young couple in their late twenties who were building a house. Later today, we are seeing two guys in their early 50s – they build a house, live in it for a few years, and sell it. They are used to this type of product, but not at this level.

Another couple we saw last week were in their seventies.

Q: Are more people now coming in and asking for smart products?
ASM: In the shops, yes. But because there is not the awareness that Hughes does it, not as many as we could get, in all honesty. People are asking more questions about it. But we don’t get our fair share of that because we don’t always display Nest or Hive in-store, or whatever. But I hope that they will end up coming to us because they have gone somewhere else and not got the experience or the answers they wanted.

Q: Is the smart home a concept that could work for any retailer?
ASM: I don’t see why not. A couple of other local retailers have tried, but they haven’t kept it up to speed in terms of how it looks and how it works – it takes some energy and effort. But don’t worry about doing a smart apartment right away. Just work out what you can do and do a bit more the next year. Grab what you can and then add extras on to it. With margins so slim these days, we have got to get other products. 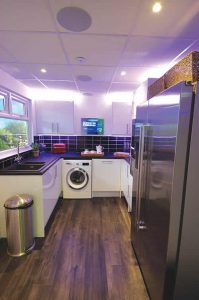 Q: Are most sales still in TV and wireless audio?
ASM: Yes. As the sales come from shops, that’s what the conversation starts with. We can then add on more audio, more AV options – centralised video. Hiding cables. Pimping up the sales the shops get.

Q: Have there been any areas of smart-home sales that have surprised you?
ASM: I was surprised at how many still want projectors and screens. These are mostly for specialised cinema rooms. In our smart apartment, we can show them how they could have that or make it discreet in a normal living room.

We have seen a lot more sales of video distribution than we expected. Once you start to explain what is possible through an HD distribution matrix, they are quite surprised. In fact most of the stuff we are selling now, I hadn’t envisaged it. And we’re selling more of it. Increasing awareness has helped – you can’t know you want something, if you don’t know it exists.

Sales of in-ceiling speakers have also rocketed for us. You sell the customer a nicer looking system, but you gain a bigger sale with a larger service element and longer installation and the customer is happy to pay for them. It helps you as a business and the customer is happier. We sell Kef and Monitor Audio, Origin and we will soon do Amina behind-the-wall ‘invisible’ speakers.

Q: There’s been a lot of scepticism about smart tech in white-goods. How is that going?
ASM: It’s a bit of fun at the moment, but it’s the first rung of the ladder. For me, it’ll be perfect when the fridge automatically can order your food, or your washing machine tell the manufacturer it has gone wrong and order the part, or your oven turn the temperature down because your pizza is burning. So yes, there is scepticism, but I think that’s from people looking for a reason not to adopt. We have sold very little so far, but the more smart appliances that can be demonstrated by staff, the more it will pick up.

Q: It’s been three years since you set up your smart division. Has it grown as rapidly as you would have hoped?
ASM: More than I had hoped. We knew the market would grow but we had no expectations. But it has grown consistently from year to year. Last year was 32 per cent. This year we are targeted for growth of 30 per cent, which we are on course for. Everything we have tried to do has been very gradual. It’s been ‘let’s learn about this, then we can move into it’.

Smart home, as much as it is important to us now, is still all about two to three years’ time. When the big boom happens, we have to be perfect at it. We have to know what’s going on. Let’s do some business now, but keep an eye on what’s happening. 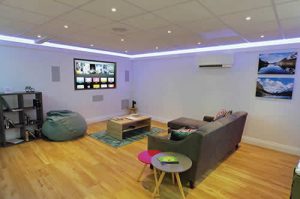 Q: Will you be looking at products such as Amazon Echo and Google Home?
ASM: Yes, I want an Echo for my birthday! We will put one in the smart apartment, not because we want to sell them, but because of the public awareness of them. John Lewis sells them. We want to see how it works with HD Anywhere, Loxone and Sonos. If that’s the biggest noise in our market right now, and we don’t have it, then we’re not relevant. We’ve got to be aware of it.

Q: You say that most customers are coming from shop leads. How will you go about finding your own new smart-home customers going forward?
ASM: Mainly advertising, through lifestyle magazines [such as Suffolk] and estate agents. And we will also advertise online. We will also work closely with manufacturers of the smart-home products. It is very exciting for them, because now they have a retailer selling their products and not just an installer. They will then send customers to us.

Consumers are becoming more aware with the Amazon Echo and all the other smart products around for making an automated or controlled home. Walk into Currys or John Lewis and they have the freestanding display units with Hive and Nest. These products are in front of the normal customer, so they are aware and if they start Googling it, they might stumble across us.

Our website is having a complete facelift and hopefully that should be up and running before Christmas.

We are looking to start working with house builders and developers soon. You don’t have to wait until you have bought the house, you can have it put in before. We are noticing that there is more of a want from developers now to move away from just a couple of phone or aerial sockets.

That is very much trading off the Hughes name. We already sell appliances and products to many developers through our Trade arm, and this is where it all shakes hands. Everything works together.