D&C Sound and Vision has won the Samsung Store of the Year award for the past two years. Not bad for a shop that started when owner Iain Gilman came back from Spain with his wife, three kids, nowhere to live and £15,000 to open a liquidated business. Sean Hannam went to meet him

Euronics retailer D&C Sound and Vision is a firm believer in the buying group’s slogan, ‘We deliver, we install, we care’.

In fact, owner Iain Gilman admits to ERT that he is fanatical about customer service.

“I’m obsessed. When I read your Dealer Profiles in ERT, I always think that they all give the same answers – it’s all about the customer service – but how do we go one better than that? It’s an obsession – the thought of somebody not being happy or giving us a bad review just doesn’t fit in our world. A lot of what we do is about OCD – if you haven’t got that mind-set, then you won’t get anywhere.”

It’s this obsession with excellence that has led to the small store, which is based in the Cheshire village of Disley, on the edge of the Peak District, picking up the Samsung Store of the Year award (Blue Ribbon Premium Partners) for two years running – 2014 and 2015.

Says Mr Gilman: “It’s given us some real kudos in the local area – people talk about it and they congratulate us when we see them. We’ve publicised it very well, with support from Samsung. There’s a good marketing budget behind it and we get in-store displays. We’ve got a Samsung TV launch event planned and if they do the awards again this year, we’re going for the hat trick.” 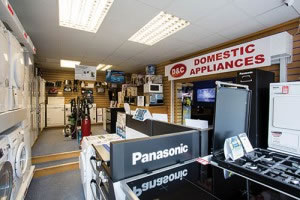 D&C Sound and Vision has seven staff, including admin and accounts, three custom installers and manager, Julian Russell, who is front of house.

In 2011, Mr Russell was shortlisted for the Salesperson of the Year in the ERT Awards.

Mr Gilman’s wife, Sarah, is a fellow director and helps him run the business.

“TVs are getting more and more complicated and because we offer free delivery and installation, we find that customers won’t take ownership of the product – they believe that they’ve got a lifetime of free call-outs,” says Mr Gilman.

“We run around after people every week, reconnecting their network to their smart TV because their router’s locked up. We build a lot of free service calls in to gain that additional goodwill and recommendations from customers.

“The more complicated the products get, the better it is for us – there’s a definite fear factor for TV and AV customers. They want us to hold their hand and they like the assurance that we’re there for them.”

Q: Can you tell us a bit about the history of D&C Sound and Vision?
Iain Gilman: It’s a very interesting story and it will be quite aspirational for a lot of people in the industry.

I came back from Australia and I didn’t have a job. I ended up managing the shop, but I left in 2003 to go and open an AV import business in Spain.

I was buying in the UK and selling to dealers up and down the Costa del Sol – it was good and I lived the lifestyle out there.

At the end of 2007, the recession hit Spain and TV shops were starting to close. The owner of D&C Satellite was going to retire and put it into liquidation. 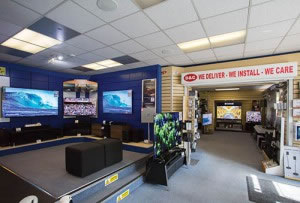 I flew over on the day that the liquidators were coming in, met them, did a deal on the spot, went to the bank and got a draft and then had to explain to Sarah that she was moving back to England in two weeks. It didn’t go down particularly well – we had kids at school and we’d had a villa built. Within two weeks, we turned up back in England with seven suitcases, three kids, nowhere to live and £15,000 in cash to open a liquidated business.

We’d been out of the country for so long we didn’t have a credit history and we didn’t have any accounts with manufacturers. I had to beg, steal and borrow off dealers that I knew, until I finally managed to open an account with JVC – they were the first to help me out. From there, everybody else came on board.

We opened the doors and we got some staff – it was a challenge, but it was brilliant and it was exciting. I was obsessed. I knew the history of the business and I knew that I could bring something to it and relaunch it under a new name – D&C Sound and Vision. When we launched, it was just brown goods, but we got into whites when we joined CIH [Euronics] around 2009, which was a big thing for us.

Q: What’s your sales split between brown goods and white goods?
IG: White goods are five per cent of our turnover – we’re bucking the trend. We do Panasonic and Samsung white goods, Miele, BSH, Liebherr and GDHA.

We still do well out of brown goods. If you sell a washing machine, you fit it and that’s the end of it – ’til they want another appliance. If you sell someone a TV, it gets your foot through the door and you can look at wall-mounting, soundbars, multi-room and CCTV. It can open up a whole lot of opportunities for add-ons. It’s very rare that we’ll just install a TV and leave it at that. We’re definitely going to be taking the smart home on because we do CCTV and wi-fi access points. We don’t do the full-home automation systems, like Crestron or Lutron, but we do HD and wi-fi distribution and we set up iPads for using Sonos. If someone comes in to buy a coax plug, they get a multi-room audio demo – we have it on the counter, we bring out a tablet and we’re straight into a dem. We do very well with multi-room music. We did a Sonos Play: 5 launch evening, supported by Sonos.

People are very aware of Sonos, but the other manufacturers are still playing catch-up.

Q: Do you have much competition from other retailers in the local area?
IG: Richer Sounds and Currys in Stockport.

John Lewis is eight miles away in Cheadle and they’re the one that the majority of our customers reference.

People ask if we can price-match John Lewis.

We say ‘yes’, but then we find that we’re usually less expensive than them, so we ask the customer if they’re sure they’d like us to price-match. We could put the price up for them.

We don’t find the internet to be our biggest issue – we find that, as long as we’re comparable to John Lewis, people would prefer to buy from us.

Our customer base is within a 10 to 15-mile radius – Glossop, Buxton and Stockport. It’s the same demographic as the rest of the independent retail trade – silver surfers. We do have a lack of the younger generation. Even though we’ve got the products they want, they don’t come in-store to buy – they’re so confident to shop online.

Q: Do you find that you get enough support from manufacturers?
IG: We’d always like more. I’m not unhappy with the level of support, but there’s always room for improvement. Sonos is now our third biggest brand – Samsung is top, then Panasonic. Bose used to be up there, but they lost their way with the independents. There’s a real kudos around the brand, but they haven’t got the products that the independents want or need. A 5.1 Bose home cinema at over £3,000? It’s a hard sell. There’s no money in the Bose SoundLink Minis – they’re selling them in Argos.

Q: You’re heavily into using social networking to promote your business, aren’t you?
IG: It’s free – you’d be daft not to. We’re always trying to grow that side. We’ve also had local radio in-store doing live broadcasts and we still do local press advertising. Our customers buy the local paper to look at the obituaries, so I always want a right-hand page opposite.

Q: Are you passionate about gadgets and new technology?
IG: Yes – I’ve got iPhones, iPads and Samsung Galaxy Tabs… Even my shop keys have a Memory Stick on them because you never know when you might be in need of it when you’re out and about. We’ve just started selling iRobot as a technology product, rather than a vacuum cleaner. We have it running round the shop in the morning with a flashing light on it.

We’re open to all the new technologies and products – I can’t sit back and just sell TVs.

Give customers a reason to come in