‘We have to sell our expertise. I am not interested in being the cheapest…’

Now more than 90 years old, Dacombes of Wimborne has had to make some shrewd moves to survive the recession and come out smiling. Chris Frankland talks to director Matt Renaut about their recipe for success

When many family-run independents have been driven under by the recession, why is Dacombes of Wimborne still going strong after 90 years? It is largely thanks to a series of smart business decisions that Matt Renaut, his father John and mother Carole have emerged successful from the economic rollercoaster of the past few years.

Digital TV switchover in 2012, although a milestone, was also a turning point for many retailers who had built their businesses on TV and brown-goods, as sales post-switch, to use Matt’s words, “dropped off a cliff”.

The Renauts had bought out Ralph Dacombe – son of the original owner – and his partner in the 1990s. Matt was a TV engineer by trade and had previously worked for Currys. They moved out of the original 600 square foot Cornmarket shop in 2011 into premises on West Street, which were double the size. This allowed them to use the smaller shop as a warehouse and service department. But, crucially, this move also allowed Dacombes to branch out into white goods. They were already a member of the Euronics buying group, and things were beginning to come together for Dacombes. 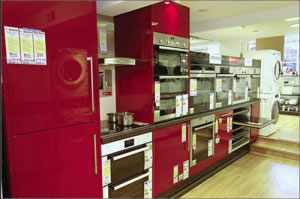 The final part of the puzzle was in the hands of another local electrical retailer, Drydens. Like Dacombes, this family business had been around for several decades, but Matt had long been trying to persuade owner Brian Dryden that it was time to retire. Drydens sold white goods only and he saw that would be a good fit for his predominantly brown-goods business.

He recalls: “In January 2014, we sat down to talk and we decided to buy him out. He was well known for SDAs, fridges and freezers, bulbs and bits and pieces. We knew we couldn’t do all of that in West Street, so we reopened Cornmarket as a shop to do the SDAs and floorcare, fires and freestanding cookers and ranges, which was what Drydens was known for. In West Street, we do laundry, fridges and built-in appliances, plus the TVs and brown goods. Brian also had a warehouse, so we took that on too in the summer, before completing the deal on November 1.”

Finally, the transformation and restructuring of a more viable business model for the future was complete.

“I looked at the figures the other day and our SDA business has nearly tripled,” Matt tells ERT. “We had a limited range in West Street. And if you have a good range of SDAs, people will buy. You either do it properly or don’t bother. You have to have a good choice of kettles, toasters, show lots of colours… I am pleased with how it is going.”

As ERT visits it is the run-up to Christmas and Dacombes is getting ready for SDAs’ busiest sales period of the year.

Just prior to our visit, Dacombes had also run a major promotion for Black Friday weekend with a four-page cover wrap, supported by Samsung, Neff and Ruark.

Was it worth it? Matt is in no doubt: “Black Saturday was the best day for sales that we have ever had. We did a week’s business in one day. What worries me is has that been taken away from December? Last year, we weren’t really geared up for it, so we made a token effort. People are being told by the media that Black Friday is the time to buy. Our customers were coming in thinking they have got to buy today. Euronics had some good teaser deals like a 40in 4K TV at £379. The important thing is that my guys could also sell the customers up.”

Adding white goods and SDAs to the mix has proved to be a winning combination for Dacombes. Matt now sees white goods accounting for around 75 per cent of total sales. 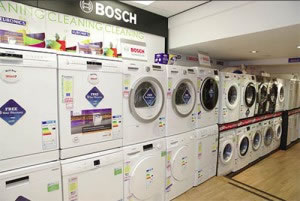 But another winning factor has been Euronics with its Agency products. Matt is enthusiastic about the Agency deals: “Agency products give us a good margin and they are always in stock. We know when we can get it and it’s not cut-price. The problem we have is that even the older generation now have tablets to keep in touch with the grandchildren on Facebook, and then they can look up what they are thinking about buying.

“All of the stock on display in the shop is Agency. Because I know when we quote a price that it will be spot-on. These products can make the difference. Customers can shop around all they like. They can try and batter us down on the deal, and I guess if it wasn’t Agency, we’d possibly cave in. Of course, we also point out that we deliver and install free of charge. We’ve only been doing Blomberg for a year now. But it’s a good seller. And there’s a five-year-warranty on their built-in products. It’s taking business away from other brands.”

“People have lost that fear of the internet they had in the early days and they will buy from any little shack if it’s the cheapest. We have to sell our expertise, the things we can offer. I am not interested in being the cheapest, I want to offer service. A lot of manufacturers don’t understand that to be able to install free of charge and have our guys take days out of the business for training, we need a little bit of margin.”

That’s why training is a serious focus for Dacombes. Matt explains: “I try to send the sales staff off at least once a year for some training with Neff and Bosch to get up to date with new products. We had Liebherr in yesterday doing some training – the rep came into the store.”

He adds: “I heard Colin Rodgers from Samsung say the other day that independents undervalue themselves. We do free delivery and everyone else charges £40 to £70 for that. A lot of my guys and even I sometimes forget that when we are negotiating with the customer.

“When you buy it from us, you get two guys who know what they’re doing turn up at the time they say they’re going to turn up, do a good job and explain the product to the customer. We use Trust Pilot web reviews and I ask all of my guys to get email addresses so that after the delivery we can ask them to do a review for us. And so we have about 40 or so good reviews that people can look at on our website. It’s all part and parcel of the reason why they should buy from us.”

Matt is a firm believer in promotion and uses many different channels to promote Dacombes, from local newspaper advertising and social media, to supporting local events.

Says Matt: “We try to do one post on Twitter a week to keep it going. We have about 900 followers on Facebook. It’s part of the whole process.”

Last summer, Dacombes took part in the local food festival. Matt recalls: “We had Neff come down with their huge demonstration vehicle and we set up in the market square. The home economist was cooking and all of my staff were there. We had a great response from that and we’re still getting the business now.

“The folk festival is the other big event in Wimborne and it is ideal to partner with Samsung on that. We had a gazebo in the Cornmarket next to one of the stages and we promoted the curved TV trade-up promo. We did a few sales on the day. We gave away a TV. It went well for us.”

On the subject of TV, Matt says that his major partners are Samsung and Panasonic, although Samsung has the added attraction of now being a Euronics Agency product. Although he has not found that 4K as such has been a driver for sales, he has been doing well with curved TVs. 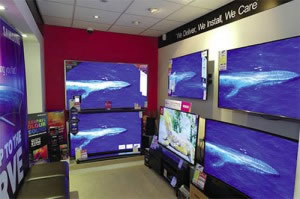 “Curved TVs are a big growth area for us. Eighty per cent of our big-screen TV sales are curved. The reason is we have it set up with a curved above a flat screen and we show them the same picture on both and ask which they prefer. And everyone points to the curved.”

Built-in appliances are also a big growth area for Dacombes, helped by the new display it installed last year. But what has given them a boost is the alliance Matt has struck up with a local kitchen company, MK Interiors.

Matt explains: “We have done some kitchens with them and we supply the appliances. There’s a good synergy between us. And they’re not looking for the ‘cheapest you can do’ and Neff fits in perfectly with that sort of customer. They want good service.

“We can help with installation on replacement appliances, but if it’s a new kitchen fit, we will just deliver them to MK. It’s a good company, they have been here a long time, and what we can offer with them is a service you can’t buy on the internet. They also did us a nice display for the food festival.

“I can’t give you a percentage on it, but there’s no doubt that working with MK has boosted our sales of built-in appliances. It’s got huge growth potential.”

And what of the future? Matt thinks that multi-room and soundbars will be one to watch. He has already sold a lot of curved Samsung soundbars at £600 to £800 to go with curved TVs. He has also being doing well with the £2,000 Ruark R7 radiogram.

Matt also wants to try to build up his rentals business. He has around 500 accounts and is now pushing white goods to his traditionally brown-good renters.

Asked if he has any further ambitions, he smiles and concludes: “To win an ERT Award!”

I don’t need training, I know how to do my job