Dacombes of Wimborne may be nearly 100 years old, but MD Matt Renaut has upped stakes, moved out of the town centre to a 4,500sq ft destination-style store on the edge of town and added kitchens to his line-up. Why and has it paid off? Chris Frankland went to find out

I am sitting with MD Matt Renaut on the comfy sofa in the reception area of the new Dacombes store in Wimborne, enjoying a cappuccino made by one of his staff using their fully working built-in coffee machine – close to the kitchen displays, but more of that later.

I mention to him how much improved the atmosphere and layout is over the old town-centre store and what a great shopping environment he has created. He smiles and confides that this was one of his major goals in what could be seen as quite a daring move.

Dacombes of Wimborne will celebrate 100 years in business in 2020 and is well established in the Dorset market town. So would the move from the centre to a slightly more edge-of-town location pay off and would their old customers follow them?

Mr Renaut is a canny businessman. The proof of that sits on the shelf behind him in the shape of the ERT award he won this year for Small Domestic Appliances Retailer of the Year. 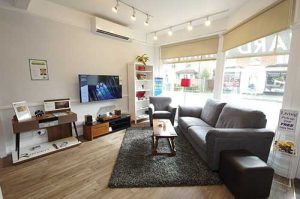 He explains: “Most people are used to getting in their cars to go and see what they want to see. I had no doubts it was going to work. The car park sold it to us. And it’s only a 10-minute walk from the town centre. Most of our customers drive here.

“I wanted a nice environment, where staff and customers would feel comfortable and happy, with good displays, that wasn’t cluttered. A relaxed, but professional, atmosphere. Less of a conventional shop – more a lifestyle destination. The TV area has sofas and rugs. We have tried to make it look a little bit more like a living room.

“Since moving here, I have noticed that we are getting higher conversion rates. Having it all under one roof is what we always wanted. Customers can see everything that we do here. People are most definitely staying in-store for longer, whereas the old premises in West Street and Cornmarket were more pop-in shops. They’d dash round, find what they wanted, and dash out. Here, people don’t need to worry about getting a parking ticket and they’re not looking at their watches all the time.

“We have a coffee machine close to where you come in and the lounge area, and we always ask if they want a coffee, let them relax, sit down, and think about what they want. But don’t get me wrong – at the end of the day, I want that sale.”

But he tells me the move was not without its challenges: “We were up against three or four developers and that was a rollercoaster ride. I got a lot of extra grey hairs and bags under my eyes from it! But we got it all together in 10 weeks. We moved in finally in mid-January and had the big opening at the end of January, which we had Harry Redknapp come along to.” 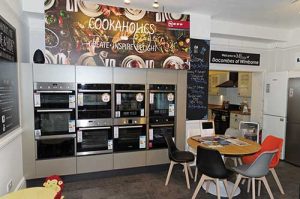 But Mr Renaut feels it has all been worth it. “Here we have the benefit of being a lot more visible. We have different ad banners for outside that we change very 10 days, so it doesn’t get samey. We have banners saying that we do kitchens, and so having a nicely-lit, aspirational kitchen display in the window was a must. And people who come in to buy a kitchen usually buy appliances, and people buying appliances may also be looking for a kitchen. So it works really well.”

With the new pattern of business having had a chance to settle down after the initial move, I ask Mr Renaut if he has seen an increase in footfall and turnover.

“Definitely,” he replies. “There is always somebody in the store. We are doing more business. We are so much more visible here. We are getting new customers who have not shopped here before and they are telling us how much they like the shop.”

And faced with a big, 4,500sq ft empty shell of a shop, Mr Renaut suddenly had a clean slate. He could reinvent the business as he chose, so what was on his wish list?

Mr Renault is clear: “We knew what sold in the two old stores. We knew our customers. I wanted to put those existing elements in the new store, but not cram it full of products. I wanted to have a more lifestyle, home-like environment. We have more built-in here, but in terms of white goods it is similar to before – just laid out in a more spacious way. We have much the same amount of TVs and washing machines as in the old stores and the split is still around 60:40 whites to browns.”

And did he reconsider how much space to devote to brown goods, given the pasting that margins have taken over recent years?

“Yes, I did have a long think. I thought initially that where we have our TV displays, we could get a lot more kitchens in, but we have been doing brown goods since the 1960s and we are really well known for that in the local area. I am an ex-brown goods engineer myself, so it’s in my blood. But that doesn’t mean that I am not going to look at it again in 10 years’ time and ask myself, is it worth doing?” 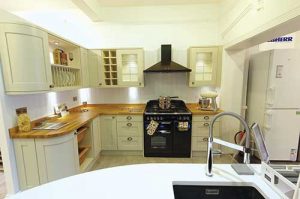 “Yes,” he responds enthusiastically. “For many years, I have been very much into the customer install or the labour-intensive stuff that people can’t get on the internet. Not just selling a box. What the kitchens and CI side does is provide a service you can’t buy online.

“I spoke to Sean Kehoe of MK Interiors as soon as I knew I was moving. We’d supplied them with appliances for quite some time. They didn’t have a showroom, so they wanted somewhere where they could show customers what they could do.

“When people walk in, they are drawn into the kitchen area as it’s very homely. We have been using the fully functional kitchen for a lot of demonstrations and charity events. We did a Macmillan coffee morning and it lets us give something back to the community. We have clubs holding their meetings here too. Just being on the high street and opening the doors at 9.30 and closing at 5.30 isn’t enough anymore. You’ve got to be more relevant and involved.

“Having kitchens has also increased our sales of built-in appliances. Every kitchen Sean sells, we supply the appliances for – on top of our usual business. They also tend to be more premium appliances, the mid- to top-end. We have also acquired a lot of contacts with developers and we are supplying appliances to them as well, which can be for 50 to 60 kitchens.”

Mr Renaut also admits that more still needs to be done to get across the fact that Dacombes now sells kitchens, “which has been a slow process”.

He tells me: “We haven’t promoted the fact that we are doing kitchens yet and this is the first time we have had them in the window. We’ve done no advertising yet – sales have been from people walking in and seeing that we have them. 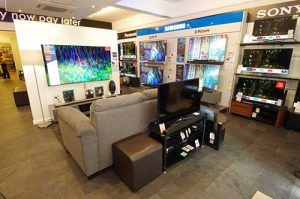 “In the first year, we knew it would be slow. But we get a 70 to 80 per cent conversion rate on the quotes we provide. We keep plugging away with local advertising. So long as they see our logo, and know where we are, that’s what I am after.”

We discuss how the reception area would be ideal as a smart-home display. So what are his plans to develop sales in that growing sector?

“I would like to cover all areas of the smart home, and there are people who want it all installed. I see the benefits. I want to do it, but I have reservations. If you are in it now, and you’re selling it now, will it all work well when it goes mainstream? I want to get into it before it goes mainstream, but I want a manufacturer to do it all. I want something that I know will work nicely with a TV I may have sold someone six months ago. I want that whole ecosystem – the long-term picture.

“It has so much potential. I’m positive about it. I’m excited about the future, but it all needs to be ‘joined up’. I haven’t seen anything yet that makes me want to commit to it 100 per cent.”

So, is he pleased with the move?

“People compliment us on how nice the store is and leave feeling happy,” says Mr Renaut. “It’s no good selling boxes anymore. But if you’re selling something that needs labour, installing and fitting, there’s a future.”