‘Everything we do is about giving ourselves credibility’

Coopers of Bath won last year’s ERT Award for Domestic Appliances Retailer of the Year and is famous for its inventive window displays and great customer service. Sean Hannam finds out how they’re getting it right…

Paul Cooper, owner of Coopers in Bath, is well known in the local area.

When ERT sits down to have a chat with him and his wife Marion, who is a director of the premium white-goods retailer, in a coffee shop near his store on the edge of the city centre, the waitress asks him if he would like the usual – ‘a Cooper-ccino’.

The business, which is in a 2,000 square-foot showroom over two floors of a listed Georgian building, won the 2017 ERT Domestic Appliances Retailer of the Year Award, and has attracted publicity – both local and national – for its creative and imaginative shop window displays.

In 2016, its Brexit-themed display, which was part of a Smeg and Euronics competition and had to include Smeg’s Union Jack FAB fridge, was featured on the BBC.

Says Ms Cooper: “It’s a bit of fun – we did the Brexit one in the run-up to the EU referendum. We had two fridges, one with a Union Jack and the other one mocked up with the European flag. It was very simple, topical and in your face. As it happened, a BBC reporter who was in Bath doing a piece on Brexit saw it and tweeted it – it was on the national news. I try and make people smile. And we won the competition…”

Q [To Paul]: Your father, Harry Cooper, started the business in south-west London in 1948, selling products and components, doing repairs and carrying out aerial installations. You took over the company in 1973, when you left university…

Paul Cooper: I’d worked in the business during school holidays and on Saturdays, so I didn’t know any better. It was a commitment that I knew I was taking on for life. 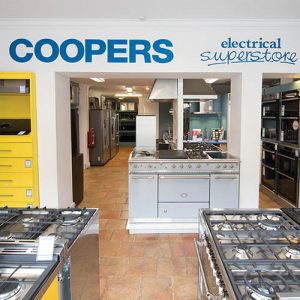 The initial store was in Mitcham. My father then split up with his business partner and opened a store in Hinchley Wood in Esher, Surrey.

We ended up with four shops around the village green in Hinchley Wood – one selling TV, one doing hi-fi, one doing repairs and one selling white goods.

We then moved to Cheam in 1983 and to the West Country in 1991. We had a mid-life crisis – we opened a hotel and restaurant just outside Bath, but if you think retailing is difficult, being a restaurateur is even worse.

I did a really good impersonation of Basil Fawlty! Our entry in the Good Food Guide called me, ‘the forthright Mr Cooper…’

Marion Cooper: That’s what the [electrical] trade think of him as well!

PC: My staff don’t allow me to go on the shopfloor because of the forthright nature of my personality – I’m Mr Grumpy.

Q: So, you moved out of the hotel and restaurant business and opened the Bath store in 1993…

PC: The choice was between Bath and Bristol – the store where we are now was the first thing we looked at. It ticked all the boxes – it’s in a really good, secondary position, just off the high street, with parking opposite and big windows at the front.

MC: Part of the reason we focus on the window displays is because we’ve got such a good frontage and it’s about keeping us in people’s minds. They aren’t constantly buying white goods, but when they do, they will remember our shop.

PC: We get a huge amount of repeat business and people come from far and wide – we’re just about to ship a Smeg cooker to somebody in Ireland.

Q: You’re a retailer that’s ahead of the game – you spot appliance trends and get in early. You were selling range cookers and American refrigeration in 1992…

PC: At one point in time, when I was on the shopfloor, my sales pitch for American refrigeration was ‘you either come to us or go to Harrods – nobody has a bigger display’.

Our ethos is to sell premium-priced products – if you can sell a £2,000 fridge, that’s got to be good news.

MC: Our shops have always been in relatively affluent areas.

Q: You made a conscious decision to exit the brown-goods market a long time ago…

PC: When we set up the Bath shop, we put brown goods in it, but then kicked them out within a couple of years.

It was a product group that never made any money – there were incredibly stupid margins and you couldn’t keep up with the technology.

Fundamentally, I’m the only one in Bath doing white goods, which is a shame in a way. A few retailers have gone in the past years – Bath used to be a nice destination town [for electrical retailing].

Q: What’s kept you here for so long?

MC: It’s partly that – we haven’t left ourselves vulnerable.

PC: I’ve always avoided over-expanding – although, at one stage we had a shop on the King’s Road, in Chelsea, specialising in built-in. Over the years, I’ve been good at spotting trends, which has kept us ahead of the game.

MC: We offer a good range of products, good prices and extremely good and consistent staff. One of our staff, Darrin [Christan] has been here since he was 16.

MC: We sell brilliant products and from the moment you walk in the shop you’ll get excellent advice and then delivery.

Q: Let’s talk about some of your suppliers – BSH, Fisher and Paykel, Miele, Smeg and Liebherr…

PC: It tends to be the premium products that you can sell with confidence and make a margin on.

Q: What are the main challenges you face?

PC: The never-ending drive downwards by everybody. I don’t understand why everyone chases the bottom price all the time – I’d much rather sell one £400 washing machine than two £200 ones. I’m not interested in volume for volume’s sake. My dad always used to say to me, ‘how’s business? Are you being a busy fool?’ I think too many people are busy fools. 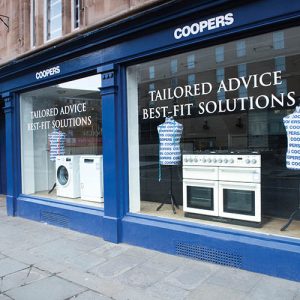 PC: This past year, turnover has been static and margins have been eroded. Margin is the biggest issue and it’s manufacturers who are squeezing it, rather than the competition. I keep talking about the ‘magic’ 25 per cent, which everybody seems to think is now an acceptable margin. From CIH downwards, everything is 25 per cent.

Q: What’s a workable margin for you?

PC: Thirty per cent. People come into my store – and most other independents – and have an expectation to negotiate. If a manufacturer suggests a 25 per cent margin, the negotiation becomes 20…

MC: We try to be. I pushed Paul to say we had to have a decent website, even if we didn’t want to sell on it. It’s a big commitment. We use it to drive business to the store – we have click-and-reserve. Once the shop’s open, we get back to them within one hour. We offer a personal service – one of our USPs is that you get real people who know what they’re talking about.

Q: You relaunched coopers-stores.com in the summer of 2016. Any plans to sell online?

MC: It’s something that we’re constantly reviewing and there’s no point in ignoring it, as it’s part of the market.

PC: We think the website needs updating – it’s a constantly evolving beast. Marion is keen to go transactional, but I think that if you’re not careful, it’s just another route to driving the price down and being the cheapest in the country.

MC: That’s exactly where we don’t want to be. 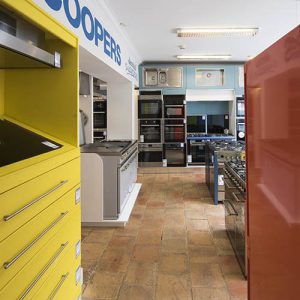 Q: What’s the future for the business?

PC: I’m really keen to transform the shop into a regional destination store for manufacturers’ products – a real touchy-feely business. If you’re selling specialist products, maybe that’s the way to encourage people to come and shop. Bath is a good attraction in its own right.

Q: What about shop-in-shops? You currently display the products in groups, rather than branded areas…

PC: I’m not so sure about shop-in-shops, but definitely being a more focused regional centre – I’m talking to Liebherr, Fisher and Paykel, Rangemaster and Smeg. I want to get the manufacturers to promote us as the ‘go-to’ place – they’re definitely trying to get more specialist outlets.

Q: Do you get enough support from manufacturers?

Q: What do they do well?

PC: We have lots of training and a reasonable amount of marketing support – BSH is constantly promoting products one way or another.

MC: Training is good – our staff know the products.

Q: Have you thought about selling kitchens?

PC: We’ve talked about it for years – it seems to be the way forward for a lot of retailers.

We have been talking to the KBBG [Kitchen Bathroom Buying Group] (see pages 13 & 44), but the layout of the shop doesn’t lend itself terribly well to doing kitchens.

If you put kitchens into the store, you’ve got to kick something else out, which is difficult.

Q: Last year, you won the ERT Award for Domestic Appliances Retailer of the Year – it was the first time you’d entered the awards. What’s that done for your business?

MC: We’ve put it anywhere and everywhere – we’ve got it in the window and on our website, Facebook and e-mails.

It adds to our credibility. Everything we do is about giving ourselves credibility as a good value, knowledgeable, reliable, ethical business. We’re constantly reinforcing that message. In Bath, people know we’ve been there a long time.

Who is your favourite rep?