Borshch Electric has invested heavily in growing the built-in side of its business and has just opened its fourth store. Chris Frankland goes to talk to sales director Phil Cox about this sizeable operation that boasts one of the largest displays of range cookers in the country

Borshch has grown steadily from the small shop outlet set up in 1982 by sales director Phil Cox’s father to sell on graded products he bought from Electrolux, to a multi-branch retailer whose turnover topped £6.5 million in 2014.

But when footfall took a hit last year, thanks, says Mr Cox, to a string of roadworks in Birmingham city centre, the business found itself at a crossroads. This, despite a £50,000 investment in new built-in display areas in the Upper Trinity Street store.

Mr Cox recalls: “Last year, we’d invested in the [Birmingham] showroom and we asked ourselves if we should invest further in it. For various reasons, footfall was down and the roadworks were a massive factor.”

So what was the answer?

“We thought, let’s try another shop,” he tells ERT. “Everyone said you must be mad. But we found the right location in Erdington, just 15 minutes from here. It’s around 3,000sq ft and is a little further out and should be less affected by the roadworks. It opened just over four months ago. It has a car park and it is on a main road. We lost some customers from here, but we gained a lot of new customers.” 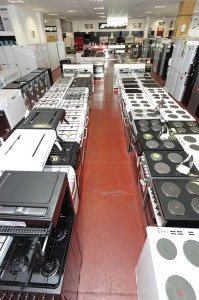 Mr Cox adds: “We knew that if we had the right product on display, we would sell it. We were hitting our targets with the first week.”

ERT is talking to Mr Cox at the Upper Trinity Street branch in Birmingham. It is biggest of the four that make up the Borshch empire and contributes around 80 per cent of turnover. Erdington we have mentioned, and then there is Dudley, which opened in 2009 and Walsall, a small arcade store, opened three years later.

The Upper Trinity Street store is in a converted factory. Borshch moved there in 1998.

With its own on-site parking and 53,000sq ft of space over four floors, including a 10,000sq ft showroom, warehousing and a service area, Borshch is able to show a vast array of stock.

He adds: “We cover the whole spectrum. Over the years, we have found that the customer who first bought a £130 graded washing machine will come back for the £4,000 Britannia cooker. We have three generations of customers. We have long-term staff who have been here 10 to 15 years. We have a very good name. In this business, if you don’t do it right, if you don’t keep your customers happy, you don’t survive.”

A good breadth of stock – Borshch boasts 25 brands – is a key element in this, Mr Cox believes.

He says: “What brings customers in is the fact that they can come here and see a large choice. They can touch and feel it and they can see across all the brands. We have a lot who come back specifically to see a salesman. They come in with their kids, sit down, have a chat and a coffee – it’s a very personal relationship.”

And talking of “graded” products, Mr Cox says that this is a side of the business he is trying to play down these days.

He tells ERT why: “We have tried to push away from the image some people have had of us that because we do graded it’s all second-hand and somehow substandard. It’s not at the forefront of where we are now.” 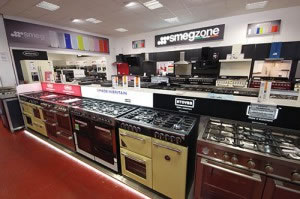 And a key part of shifting that emphasis more upmarket was shown by the company’s investment last year of £50,000 in a new area specifically for built-in appliances and range cookers. Mr Cox says: “Built-in has always been a good profit-earner for us. The Smeg Zone is the most recent addition to our displays. Every one of their range cookers is on display, we have 60 per cent of their built-ins and we’ve got every one of the FAB refrigeration range. We have just signed up to take the small appliances, too.”

And Mr Cox was happy to make this investment in Smeg because of the commitment they made to him: “Smeg came to us and said they would support us with the cost of the displays. We have a huge investment in Smeg. Five years ago, we were doing nothing with them and now we have one of the biggest displays in the country.”

Mr Cox tells ERT more about the thinking behind this commitment to built-in: “We have areas for CDA, Caple, Bosch, Neff, Baumatic, Hotpoint, Indesit, Fisher & Paykel and Smeg. We needed a more upmarket area. It was a bespoke area and we have one of the biggest displays of range cookers in the country with over 30 on display. And the staff have all been trained on all of the cookers we have on display.”

Did he have misgivings? “It was a gamble for us,” he admits, “and we wondered whether we were going to lose our core customers because they would think we were going more expensive.”

Mr Cox says that built-in is a growing part of turnover. “It’s an area he wants to get stronger in,” he adds. “There’s more growth in built-in and not too many people have good displays. I’d like to push it more in the future, it is a natural progression for us.”

One area where Mr Cox has seen great improvements is in the support he is getting from manufacturers.

“Last year,” he tells ERT, “there was a big shift in manufacturers supporting us. I’d say we have reached a turning point. Manufacturers have come back to the independents and said ‘we do need you guys, you are an important to us and we have let that slip’. We have found a lot more of them will address the pricing structures outside bricks and mortar.

“Smeg have been phenomenal. They have been the strongest brand we’ve ever had in terms of support. They come in and they sit down and listen. If I phone them and say a product is being battered on the internet, they will look into it and try to resolve the problem.” 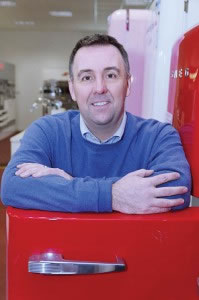 But it is not just Smeg. He continues: “Bosch and Neff joined Sirius [buying group, of which Borshch is a member] last year and our business has been going up with them. They are a really good company. Again they help us with display costs. Brands that won’t support us, we don’t stock.”

One factor that has spurred Borshch on to invest in growing the built-in side of its business is, as Mr Cox observes, the fact that “the middle and the bottom – well that’s just become a car boot sale price-wise”.

He says: “Manufacturers seem to have had a myth that people come into an independent, spend 30 minutes talking to a salesman and so don’t mind spending £30 more. And I have to tell them no, because they literally get their smartphone out, look up the price and say, I’m off!”

In terms of pricing and having that competitive edge, Mr Cox is a firm believer in the benefits of belonging to a buying group – in Borshch’s case, Sirius.

“It’s opened our eyes as a business. We live in a goldfish bowl and you never see outside of it. We have a conference twice a year attended by 50 to 60 members and manufacturers. Over three days you spend time with people in other businesses and that is invaluable.”

He likes Sirius because members can deal directly with manufacturers and can maintain their relationship with them, while still benefiting from the buying power of a big group. “But if we have a problem,” he adds, “being a Sirius member, we can go to them with a larger voice – the voice of 120 people. You have to have some support structure is vital. To stand alone is very difficult.”

In terms of marketing and promotions, Borshch advertises regularly every week in the local newspaper and has invested in Google words and search engine optimisation to increase the effectiveness of its website. It also monitored all calls to the business generated from the website to ensure they were being converted into people coming into the shop. 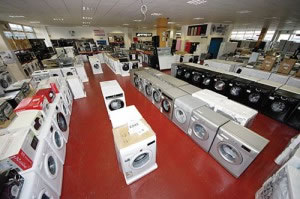 Borshch also believes in giving back to the local community and Mr Cox explains he is a staunch supporter of the local Help Harry Help Others charity set up by local boy Harry Moseley, who died from a brain tumour aged 11. He helped raised a lot of money for Cancer Research and HHHO carries on the good work.

But what of the future?

Mr Cox says that opening the Erdington store “has shown us that it isn’t a reducing market, that we were not doing things wrong. And certainly for the future, if the right pitch comes along, there’s nothing to say we won’t have a go somewhere else. It has given us a great confidence.”

But before ERT hops on the train south, we have to ask why they called the shop after a cold beetroot soup?

Mr Cox smiles and explains: “It was started by my father and mother – and she is Polish. My father came up with the idea – his philosophy is that the business is kind of a mix of ideas, so he liked the idea of the name and he went for it.”

Well, the recipe certainly seems to have hit the spot for their West Midlands audience. And it’s still very much a family business. Says Mr Cox: “My mother still does the accounts. My brother runs the service side. My daughter runs the HR department.

Planning for the comeback – part two