‘Hi-fi was doomed, but Steve Jobs saved the industry’

From humble beginnings in a former Victorian brothel off Tottenham Court Road to an £8m-a-year, 14-store empire whose name is synonymous with quality, Audio T is one of the UK’s best-known hi-fi retailers. It is 50 years old this year. Chris Frankland speaks to director Jerry Lewin

Audio T is a legendary name in hi-fi retailing. This year marks its 50th birthday and 2017 will bring another milestone – the 30th anniversary of the Bristol Sound & Vision show, which it organises.
It was one of the go-to retailers when I first caught the hi-fi bug in the Seventies and it still is today. It is passionate about two-channel audio and its mission is to introduce as many people as it can to how a good hi-fi system can change their lives.
Director Jerry Lewin is just as committed to that mission as he was when he first joined the industry some 25 years ago.
I go to meet him at his office in Audio T’s Oxford branch, to talk about how and why Audio T is still a force in hi-fi retailing and how he first got involved with the business. 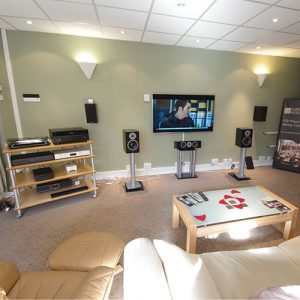 Q: So it’s 50 years in business for Audio T?
Jerry Lewin: It’s fantastic that we have been able to keep it going. It was a different animal when it started as a discounter and Resale Price Maintenance was in force. Once that was removed, the market changed and [founder] John Bartlett bailed out.
To me personally, hi-fi was my hobby and it’s gratifying to see that there are still enough people keen on it to keep our business going. It certainly looked at one point as if hi-fi was doomed. But as an Apple fan, I think we can say that Steve Jobs actually saved the hi-fi industry, because he got young people into music via the iPod.
As the iPod generation grows up, they will realise they need something better and some will become our customers.

Q: So who are Audio T’s typical customers?
JL: We basically sell to enthusiasts and always have. One of the gratifying things about the Bristol Sound & Vision show is that it has always had a huge churn even after 30 years. When we looked at the figures for last year, 40 per cent of the people who came had never been before. It is the same in the stores, 60 per cent are existing customers – and it’s been that way forever.
We are very old school. We always try to play people something good first, no matter what they ask for. We always try to play them the next thing up from what they think they are looking for, so that they can see where they should be going next.

Q: Do you get any passing trade?
JL: We have stores in prime locations and stores in the middle of nowhere and it doesn’t seem to make the slightest difference. We are not passing trade-driven. We are a destination shop. You have to be in the right mind-set. If you ask people what they think a hi-fi costs, they still say £1,000, as they would probably have said 30 years ago – and it’s just not true.
I think the message of what hi-fi is has not got through to most people and they are shocked at what a good hi-fi costs. And even if you said £2,000, they would still think it was a lot. And if you said £10,000, which is getting closer, they’d think you were mad. But hi-fi enthusiasts build up their system over many years. They don’t spend it all in one go. 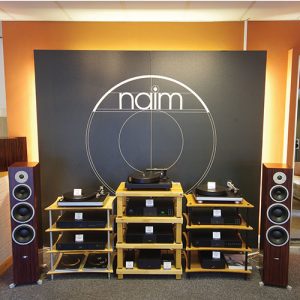 Q: So how did you first get involved with Audio T?
JL: Hi-fi was my hobby. In 1972, when I left university, I applied for a job at Audio T in West Hampstead – and they turned me down!
I didn’t have a lot to do with Audio T until 1976 when I was working for the Yamaha distributor and was organising a dealer trip to Japan and met Tony Jones, who had just taken over Audio T. We became very good friends and we got together with a guy called Vince Adams and started Superfi. Tony and I bailed out of Superfi in 1980 and I ended up here in Oxford running what was the Superfi store, but became my own venture, Absolute Sound & Video. In 1990, Tony Jones and I combined forces as Audio T.
Then we hit the horrible recession of the Nineties. We had to close several stores and I bought Tony out.
In 2008, with another recession looming, we decided to get together with Gay Brown, who had six shops in the north-west, and Tony Revelle of Audio Excellence. Between us we actually had 23 stores and we had planned to borrow money, expand and really go for it. What actually happened was the banking crisis and the recession, and banks stopped lending – so far from getting bigger, we had to shrink to survive.
I think the reason it has worked is that we all had equal shares and were old enough for our egos not to get in the way.

Q: The Bristol Sound & Vision show notches up 30 years in 2017, but how did it all start?
JL: I have been organising exhibitions since the year dot. Tony Revelle and I decided to pick up the baton and have a show that didn’t clash with the London shows. So we moved it from November to February in the hope that we would extend the season and decided to run it in Bristol.
We have exhibitors say that what they like is that you know what you are going to get. If you had walked into the show in 1987 and then again this year, you’d have noticed very little difference. That’s a conscious decision. It was also a selling show from day one. People pay us in full when they order at the show and collect from a shop. Last year, we had the best level of sales since 2003. We will sell out for 2017 this month [October]. 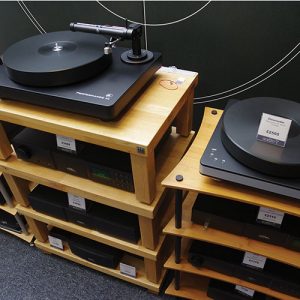 Q: You say that getting younger people in-store is a dilemma for the industry?
JL: When you look at those in the queue at the Bristol Sound & Vision show, they are mainly over 50 – and many are dressed in anoraks – but there are more families.
In a way, our customers are self-selecting. Those who don’t think they can afford it, don’t come. You could say that’s bad, but it is also good, as we don’t get time-wasters.
I was involved with trade association Bada [which became The Clarity Alliance] and over the years we have tried to get everyone to work together to promote the industry. It never happened with Bada and, sad to say, I don’t think it will happen with Clarity, either.
How we get people in front of decent hi-fi, so that they put it on the list of things they want, is to my mind something that the industry has never really tackled. It’s word of mouth really. Everyone who comes to my house has to listen to my system, and hopefully they will go off and tell other people about it.
Shows are an obvious way. And we have started, as Audio T, to go to record fairs and we try to encourage people to come in and have a dem.

Q: Have you noticed a surge in turntable sales as part of the vinyl revival?
JL: Hugely so. We sell a lot of turntables and I think it is absolutely wonderful. It is a good way to get young people involved. For them vinyl never went away – DJs have always used vinyl.
There are some extremely poor turntables out there, and there will always be people jumping on the bandwagon trying to persuade you that their £50 turntable is good. I am not terribly bothered. They could be future customers for us.

Q: Is streaming a large part of your sales now?
JL: Very much so. But again, it is the enthusiasts. We are not getting many of the iPod generation coming in looking to buy a £2,000 streamer. People who have expensive CD players do. Sales of CD players have pretty much died. CD is declining but streaming can be equally good and hi-def can be better. With a good-quality service like Tidal, you can listen to virtually anything in the world, and if that isn’t going to encourage people to listen to more music, I don’t know what is. 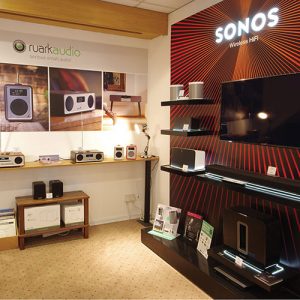 Q: What of the future for Audio T? Any more store openings?
JL: The short answer is no, at the moment. Our business has been unaffected by Brexit, but we’ll delay the decision until we see how the land lies.
We are profitable and we are repaying some of the money we put into the business during the recession. We had a particularly good summer last year and we are up on that.
A lot depends on how well hi-fi continues to do. If two-channel continues to thrive, Audio T will expand slowly and cautiously and continue to do a great job for the people who want a great job doing.
I would love to think two-channel is on a permanent up, because I love music, which is why I got involved in the first place. People will get far more pleasure if they spend £20,000 on a hi-fi than if they spent that on a car.

Consumers will expect a flawless experience