Things can only get smarter

‘AI’ is the new ‘smart’, and a great in-store conversation-starter. However, retailers will play a crucial part in explaining this potentially confusing technology to customers. Jamie Carter reports

‘Now with AI technology.’ That’s becoming a common refrain in the world of CE, with artificial intelligence seemingly taking over as 2018’s must-have feature in everything from smart speakers and TVs to wireless routers and lighting.

AI is suddenly everywhere, and if a product doesn’t have AI inside, it’s not worth having.

Futuresource’s research indicates that smart speakers like the Amazon Echo and Google Home still dominate the AI market. It reports that smart speakers represented over half of the total 49.6 million voice assistant devices shipped worldwide last year. Meanwhile, the range of products supporting voice assistants, such as Amazon Alexa and Google Assistant, is expanding to include media streamers, consoles, smart TVs and wearables.

Use your voice
Ask almost anyone what AI means and it’s likely that they will reply that it has something to do with Alexa and the Amazon Echo smart speakers. They might even mention Google Home or Siri. It’s just the tip of the iceberg, but voice-based intelligent agents such as these are the first, and most visible, form of AI to the average consumer. For now, Amazon’s Alexa has a significant lead, but Futuresource believes Google Assistant will close the gap over the next two years.

Voice assistants are based on a key theme of AI called natural language processing (NLP) – the most common form of AI in consumer electronics. It’s essentially the act of getting a computer to emulate the human ability to recognise human speech, and speak or write a reply. Another facet of AI is machine learning, whereby software changes its behaviour according to the data it receives.

Talk the talk
Smart speakers use relatively simple rule-based algorithms, whereas the wider subject of AI is an incredibly complex and experimental subset of computer science.

“Voice-based agents presently relay spoken commands to the cloud, the speech is analysed, an appropriate response is computed, and the result is sent back to the voice agent to act upon,” says Simon Forrest, director of consumer electronics at Imagination Technologies. “This looks like a form of intelligence to the user, but is probably not considered AI in the purest sense of the word.”

He explains that the processing is not handled locally by the voice agent itself – instead, massive server arrays decompose and analyse speech using a combination of advanced pattern-matching algorithms and neural network technologies. “So while the system overall uses elements of AI to arrive at a result, the devices themselves are not intelligent.” That will change only when AI-capable silicon chips can be embedded in each specific device.

“Often times, it’s not really AI, but it doesn’t mean that there isn’t some really great tech in the product,” says Will Merrill, senior designer at London- and New York-based strategic design company Smart Design. “Voice synthesis, voice detection and recognition all utilise machine learning algorithms, which stemmed from research within AI development.”

AI on the big screen
Although we’ve seen voice-activated TVs before, 2018 marks the first time voice assistants are appearing on big-screen TVs. Samsung is offering its in-house Bixby assistant on its QLED TVs, while LG is adding Google Assistant to the webOS platform on its LG OLED TVs and LG Super UHD TVs as part of its ThinQ AI range.

The latter’s TVs will enable the user to ‘change to cinema mode’, ‘search for the soundtrack of this movie’ or ‘turn off the TV when this programme is over’ by speaking to the TV, but also by speaking to the Google Home smart speaker, or any other smart speaker compatible with Google Assistant. Expect mid-range TVs to include voice assistants in 2019, and for it to be a standard feature of all TVs by 2020.

The AI TV is also not just about voice. Samsung claims that its flagship 85in Q9S TV uses AI to convert low-resolution videos into 8K. That’s effectively relabelling an upscaling algorithm as a form of AI to catch the wave of interest in AI.

Kitchen talk
Voice-assist functionality is increasingly being incorporated into kitchen appliances, too. “A smart washing machine can suggest the best way to remove red wine stains from a favourite top,” says Steve Macdonald, marketing director of freestanding at Hoover Candy UK, which is about to launch its Hoover AXI washing machines that can be voice-operated by voice and will even be able to offer stain removal advice.

“Market trends suggest that consumers are ready to embrace AI in the home, so it’ll be interesting to see the extent of the uptake in voice-assisted white goods and cooking appliances.”

Speak for yourself
Whether AI is merely a marketing concept or something more era-defining, it’s certainly a valuable a conversation-starter. “If a home appliance utilises AI, then it’s likely to be the leading feature referenced when talking to a consumer,” says Mr Macdonald, who recommends that retailers give live demonstrations with a working wi-fi connection.

However, he also warns not to lose focus on other aspects of the machine that the consumer may actually be more interested in, such as aesthetics, or energy usage.

“Only by doing so will potential customers understand how these voice-enabled products can improve their life, and which use-case best fits their personal situation.”
Do consumers know enough about the smart home, let alone about AI? Probably not, but they soon will, with some thinking that the manufacturers will do most of the heavy lifting.

“Most of the education will be done by the two major voice services from Google and Amazon, specifically through advertising,” says Mr Amsterdam. “Brands like JBL and Harman Kardon will team up with both of them, and other major parties in the voice/AI area, to explain key use-cases.” A lot of that is being done on TV, but digital marketing and p-o-s displays in-store are also playing a key role.

Products that promise AI are merely dipping a toe into a vast subject that future products are very likely to massively expand on – so don’t exaggerate about these early products’ AI capabilities.

Voice platforms are not a magic bullet for a hands-free home, and promising otherwise will only cause problems. “With usage drop-off levels very high – and perhaps people returning items straight after buying them – the industry needs to be sure they are not overselling a product, but instead being realistic about what a product can help and what it can’t,” says Smart Design’s Mr Merrill.

Nor should retailers suggest that everything will soon come with AI, because it likely won’t. “It makes sense for devices such as TVs and music players where voice control simplifies interaction, enabling the user to quickly navigate a vast library of content,” says Imagination’s Mr Forrest. “But you won’t want every device in the home to be voice-enabled.” Toasters, kettles and anything that requires require manual interaction are good examples.

To audiophiles, home-cinema aficionados and other early adopters, the likes of the Echo is a pure novelty, but not for long. Serious hi-fi products that embrace voice control are beginning to appear. Polk Audio recently unveiled its Command Bar with Alexa built-in, while Echo devices will soon be able to control Sonos speakers. Futuresource thinks that AI will soon colonise headphones, wearable devices, wi-fi routers and set-top boxes. 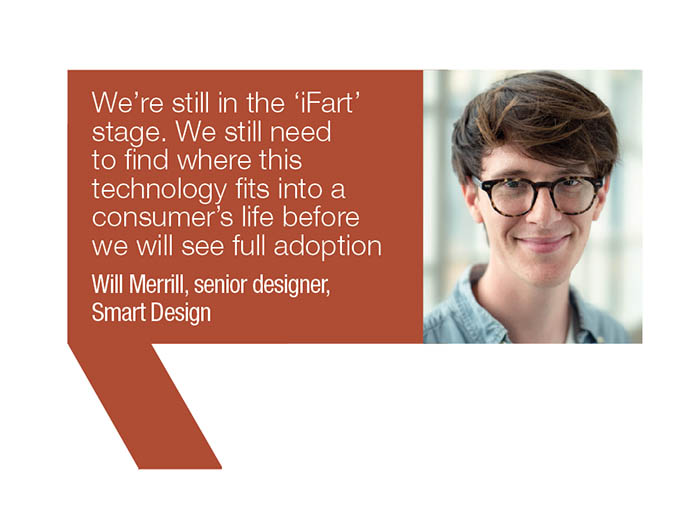 Look, no hands
A product doing what it’s told is only one early aspect of AI. In the coming years, expect AI to become a lot more impressive, as products begin to take the initiative with no input from humans.

“Future AI products will most likely ‘see’ compatible products on the customer’s home network at installation, allowing these products to copy wi-fi settings and install themselves without input from the consumer,” says Mr Amsterdam. This is when the smart home will come into its own, moving beyond smart speakers to systems that understand, learn, predict, adapt and operate autonomously.

By 2027, voice assistants will be much more pervasive in smart homes, interacting with sensors, cameras, control points and devices to automate lots of daily tasks, according to Futuresource.

“True AI uses experience and reasoning, whereas voice agents and smart-home products are replicating the impression of AI through connection with cloud-based computer engines,” says Imagination’s Mr Forrest. “Today we have ‘command and control’ functions, but we don’t yet have true meaningful conversations with smart devices.”

So the next step is AI products that are much more than just hands-free, closing windows and locking the house when the owners leave, or using multiple sensors around the home to intelligently manage energy usage.

A little more conversation
It now seems certain that AI will become part of the conversation when selling all kinds of consumer electronics, but independent retailers would do well to see the AI era in a long-term context.

“We’re still in the ‘iFart’ stage of the technology and I think we still need to find where this technology fits into a consumer’s life and technological ecosystem before we will see full adoption,” says Smart Design’s Mr Merrill.

“It’s more likely that smart homes will evolve around some form of master control,” says Mr Forrest at Imagination.

“One system that collates input from various sensors and microphones, harnessing AI in specific CE products alongside cloud processing, then managing interactions across devices in a truly smart fashion.”

That’s why there’s a big focus on AI and voice assistants. It’s thought that whoever controls the user interface of these early AI products will influence smart home development for decades to come.